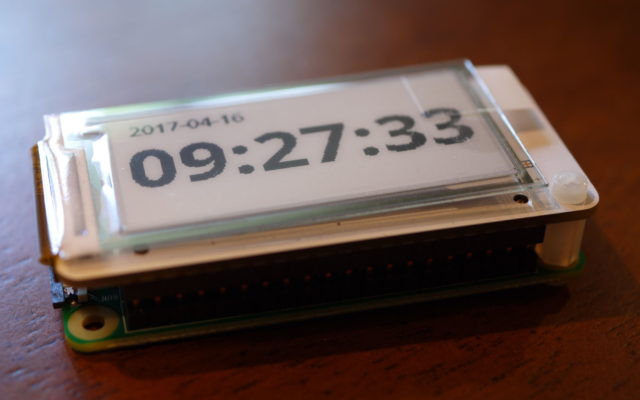 After finding the PaPiRus ePaper panel, I picked up a Raspberry Pi Zero W to drive it. To be perfectly honest, the early Raspberry Pis never really excited me. However, the Raspberry Pi Zero’s small footprint caught my attention. Add in WiFi and Bluetooth, as found on the Zero W, and you have a solid IoT starter board.

Thanks to the popularity of the Raspberry Pi, both Funtoo and Gentoo have guides on setting up Funtoo/Gentoo on a Raspberry Pi. Getting a base system up and running is straightforward. Though, if you have to compile anything it will take a while.

Getting WiFi to work requires some compiling. Funtoo’s guide for setting up WiFi on the Raspberry Pi 3 works for the Zero W for the driver side. On the userland side, you will probably want something like NetworkManager and wpa_supplicant. Unfortunately, neither package come installed in the base install for Funtoo/Gentoo.

Normally, chrooting in from a liveCD with working networking, installing the requisite package, and rebooting is sufficient. However, in this case, you’ll need to setup Qemu on your workstation and then use it to chroot into the ARM environment to compile and install NetworkManager. This will take quite some time.

PaPiRus is a ePaper pHAT for the Raspberry Pi Zero. It contains an I2C LM75 temperature sensor, a few push button switches, a SPI NOR flash, and a ePaper panel. Unfortunately, it does not have an I2C memory device to store the device tree overlay information needed for auto-configuration of the SoC.

eInk Display With Date and Time

Since the installer for PaPiRus’ driver, and the manual instructions for that matter, assume a Debian based system, they do not work with Funtoo. Instead, follow the “Install Driver – Option 2” instructions, and rather than apt-get, use the following:

After running make rpi-install the last few steps diverge from the “Install Driver – Option 2” instructions. Since Funtoo by default uses OpenRC rather than Systemd, the epd-fuse.service isn’t going to work. Instead, the OpenRC script below can be used (save as /etc/init.d/epd-fuse).

After saving the epd-fuse script, rc-service epd-fuse start can be used to start the driver. Of course, installing Systemd and uninstalling OpenRC is an option. However, that is quite a bit of effort for something that is overkill for a Raspberry Pi.

Other things to consider, while Funtoo places fonts under /usr/share/fonts, the font packages and directory structure of /usr/share/fonts differs from what PaPiRus expects. The easy way to resolve this is to modify the examples with the correct font location.

Rather than the older module blacklist/modprobe method for enabling various SOC features, the Raspberry Pi kernel has moved to Device Tree Blobs. Which is not entirely bad. However, they can be difficult to get working.

For short-term testing, to get the PaPiRus to work, I ended up using dtoverlay to enable the SPI and I2C buses, and then had to use modprobe to remove the LM75 driver so that the I2C bus was available to the epd-fuse driver.