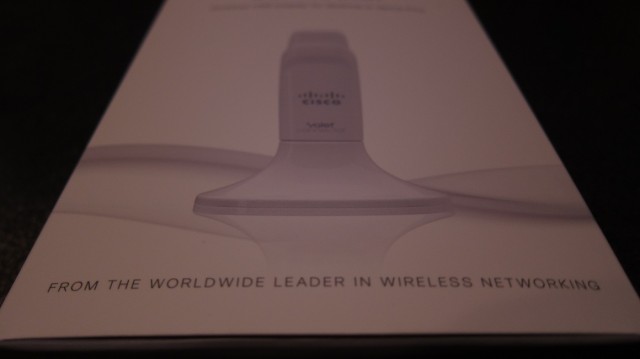 With the Valet series, Cisco is clearly targeting those who are not comfortable installing new hardware, let alone configuring a wireless network. The Valet Connector doubles as a 128MB USB memory stick. About 38MB is used for the driver, easy setup software (tries to run through using the Windows autorun feature), and documentation. The devices does not even appear as a WiFi device to Windows until you run the setup software. For powerusers this can be quite annoying, but for the target market, this should reduce confusion.

The packaging is the now semi-popular slide out cardboard box within a cardstock outer box, similar to what the HP TouchPad and accessories come in. For a simple WiFi adapter, this is a bit overkill. However, it sure beats the sealed plastic shell packaging it could have come in. Size wise, the box is twice the size of the box that my S90 came in. 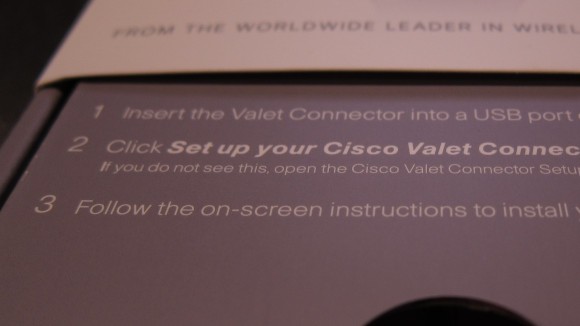 When sliding out the inner box, the first thing seen is a set of instructions for installing the device. They outline 3 simple steps, connect the device, launch the setup software, follow the on-screen instructions. This keeps things simple for the target market. Sliding the inner box out further reveals the Valet Connector.

The adapter is about the same size of the other USB WiFi adapters that I have. One thing to note is the Valet Connector does not have a status/activity LED that most USB WiFi adapters have. While this makes it slightly more difficult to determine if there is a USB or device fault. However, that blinking LED found on most adapters can get quite annoying.

Numbers wise, it can easily pull 7MiB/s on large files (6GiB). One disappointing thing is during large file transfers, the connection rate will drop from 300Mbps to 160Mbps. I’m not sure if this is a power/heat management feature, where dropping the rate in about half allows the wireless chipset to run cooler or the noisy environment I live in (every house in the neighborhood seems to have a 2.4Ghz phone and WiFi router). For comparison the Linksys WUSB600N usually connects at 270Mbps did drop to 160Mbps when starting the transfer of the same file. However, it was able to sustain a transfer rate of 10.1MiB/s, a full 3MiB/s faster than the Cisco Valet.

Overall, the Cisco Valet is a much nicer product than the old Netgear WPN111 that I replaced with it. Even though I am not in the target audience for this product, I can appreciate what Cisco is trying to here ease of use wise. This is almost something you could give to your tech-illiterate relatives and get them to setup by themselves. Performance wise, it is not on par with the better 802.11n products out there (including the older Linksys WUSB600N and Intel Ultimate-N 6300). But let’s face it, the target audience won’t notice the difference of 3MiB/s in transfer rate for large files.

4 thoughts on “Cisco Valet Connector (Model No: AM10)”