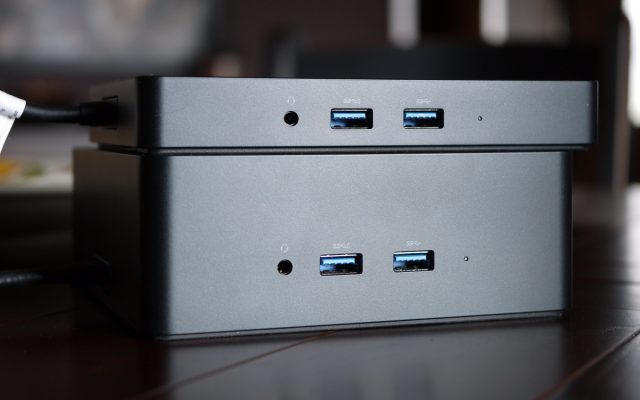 The WD15 uses USB C interface rather than Thunderbolt 3. Physically, the connector looks the same (Thunderbolt 3 uses the USB C connector). As a consequence, the WD15 is more likely to work with a larger assortment of devices. An interesting experiment would be to attempt to connect it to a smartphone with a USB C port that supports VESA DisplayPort Alternate Mode.

Since the WD15 does not use Thunderbolt 3, it does not have the bandwidth to drive two 4k displays like the TD15—the WD15 is limited to driving two 1920×1200 displays. However, it still maintains the capability of powering the device plugged into it via the USB C cable. Port wise, the WD15 and TB15 are very similar. The WD15 is only missing the Thunderbolt 3 daisy chain port and the full size DisplayPort.

Size wise, the WD15 is much more manageable than the TB15. It is less then half the height of the TB15, and is not nearly as deep. However, it is slightly longer, making it rectangular when looking at it from above instead of square.