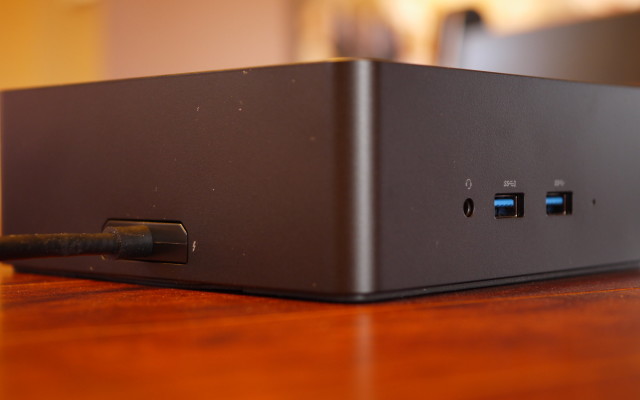 After plugging in the TB15 to the 9550, I was able to power the 9550 from the TB15 over the Thunderbolt cable. So, this is a true one connection only docking solution. Which is pretty sweet. According to Dell, this is the case for all laptops that consume 130W or less. This seems a little conservative as this device came with a 240W brick, and there is no way it is going to consume 110W itself.

Internally, the Ethernet and Audio jacks on the TB15 are powered by Realtek USB devices. It appears the displays are just piped over using the DisplayPort signaling mode. So, nothing too magical about the innards. Port wise, these are the ports available on the TB15:

The TB15 and the NUC5i3RYK side by side

Size wise, the TB15 is a little on the chunky side. It is larger in every dimension in comparison to the Intel NUC5i3RYK. Even worse, the 240W power supply is gigantic. If there is a single reason to go with the 180W model it is for the smaller power brick.

Also, there is the noise. Normally, when just plugged into the power adapter and idling the fan does not run. However, when plugged into the TB15, my 9550’s system fan never left the second to lowest spin rate. It was by far the loudest thing on my desk. Whether this is intentional, due to heat generated by the Thunderbolt controller, or some other side effect, it would be nice if it went away.

The Thunderbolt cable is removable. However, it has a mounting bracket that requires two Phillips head screws to be removed.

A closeup of the Thunderbolt connector on the TB15

The underside of the TB15, notice the flap on the left edge

Underneath the flap are two screws

A closeup of the TB15’s end of the Thunderbolt connector

Without the 9550 plugged into it, the TB15 draws around 2.6W to 3.2W as measured at the wall by a Kill-A-Watt meter. With the XPS 15 9550 plugged in and idle on Windows 10 desktop the combined power consumption is around 28W as measured at the wall. So there is definitely an increase in power consumption for the convenience. As a final data point, the 45W, 130W, and 240W power adapters consume about 0W, after the initial surge current subsides, when not plugged into a device.