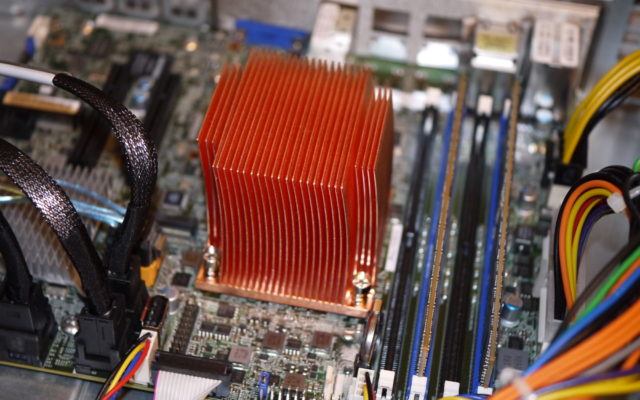 After assembling my new home server, I ran into a bit of a heat issue. The Xeon-D SOC would get quite hot under load (80C), and was a little warmer than desired while idling (40C). Attempting to cool itself off, the motherboard kept the chassis fans spinning fast enough to be annoyingly loud. Since the heatsink installed on the motherboard was designed for 1U compatibility, and the case I’m using is 2U tall, it was not getting the airflow it was designed for.

Initially, the plan was to create an air duct to direct one of the 80mm chassis fans onto the heatsink. However, after a little perusing, I found an forum topic on heatsink options for the Supermicro Xeon D boards. One of the forum members found that the Cool Jag BUF-E Core, a 2U copper heatsink fits the hole pattern for the Supermicro Xeon D boards.

This 2U tall copper heatsink weighs in at a whopping 0.5Kg (~1.1lbs). More importantly, it is readily available online through ’boutique’ sellers. And, at ~33USD, it is reasonably priced.

The rubber o-ring has been pried out of its grove

While the BUF-E comes with its own mounting hardware, the threading on the bolts does not match the X10SDV-7TP4F’s stock backing plate. Rather than trying to remove the backing plate, a mounting bolt swap was performed. The BUF-E uses rubber o-rings for retaining the mounting bolt-spring assembly in the heatsink. Using the edge of X-Acto blade, or a miniature screwdriver, these o-rings can be slipped out of their retaining grove and removed.

Next was removing the X10SDV-7TP4F’s stock heatsink. Since the thermal pad that Supermicro uses is quite viscous, this works best if the heatsink is warm. Just loosen all four mounting bolts until they no longer contact the backing plate and twist the heatsink. Note, it may be a good idea to remove any installed RAM before doing this—it goes without saying, this should not be done while the board still has power.

A closer look at the retention clip

Not using the plastic washer from the stock heatsink

After applying some thermal paste (Arctic Alumina), and applying a tint coat on the heatsink to fill the milled alignment corners, the BUF-E was installed. All four bolts lined up with the stock backing plate, and secured the BUF-E as expected.

As a completely unscientific test, I re-compiled Samba 4.5.4 after installing the BUF-E. The core temperature for the Xeon-D peaked at 54C. This is an impressive improvement from the 80C seen before with the stock heatsink.

A look at the base temperature of the heatsink

Using a thermal camera to get a general sense of the hot spots on the X10SDV-7TP4F, it is apparent that the Xeon-D is no longer the hottest item on the board. That distinction now goes to the LSI 2116. Upgrading the LSW2116’s heatsink will be a little more difficult. It ships with a very low profile heatsink to prevent interference with any installed PCIe cards that overhang the PCIe slots.