Mozilla uses the GTK for its applications’ GUIs. As every KDE user knows, KDE uses QT (KDE4 uses QT4.x), and GTK applications look ugly in KDE. There are ways of getting GTK applications to look not as bad in KDE (qtCurve). However, these typically are a custom qt theme, which is not what I want (I’d rather skin the few misbehaving applications).

END_OF_DOCUMENT_TOKEN_TO_BE_REPLACED

Yes, you can run BFHCC.exe in Linux under wine. You just need to use some of the Microsoft libraries (OLE32 is just one of many that are needed). If invoked from the same directory as BFHCC.exe resides, it will load your settings just fine. However, it won’t let you warn, kick, or ban players (the pop up menu when right clicking on a player name does not work). Additionally, it runs kinda slow (I am running a 64bit kernel with a 32bit Wine install for compatibility reasons).

The other, somewhat more powerful, Battlefield Heroes server manager, Ness Manager, works perfectly in Linux. Best of all it doesn’t need Wine to run. This is thanks to it being completely written in Java. Naturally, you need a Java run time environment (JRE) installed for this to work. To install it you may need Wine (it’s a .exe installer), but once the files have been installed, you’ll notice they are all .jar files. Copy these to a place you can access easily. To start Ness Manager all you need to do is type java -jar BFHNessManager.jar while in the directory where you have Ness Manager installed in. Ness Manager works exactly as it does in Windows, which is great, and runs fast compared to BFHCC. 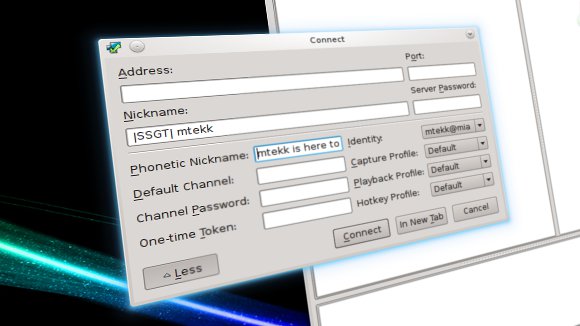 Most gaming clans use VoIP software to communicate in game, one of the most popular applications for this is Teamspeak. Starting in Teamspeak 3.0, a text-to-speech engine is included to provide notifications of players entering and leaving channels (among other things). By default, Teamspeak will try to pronounce your nickname, not always a good thing when the nickname contains your rank (e.g. “|sgt| mtekk”, we want everyone to hear just “mtekk”) as the engine pronounces “|” as “vertical line”. In Windows and OS X you can use “Set Phonetic Nickname” under the “Self” menu. In Linux, the prompt will open, but the text box is disabled. This is due to a text-to-speech engine not shipping with the Linux version of Teamspeak3.

So how do we set the phonetic nickname in Linux? Well, it’s really simple. Go to “Connections > Connect”. In that prompt click the “more” button. You should now see a field that is labeled “Phonetic Nickname”.

Back into the Gentoo partition this evening, and things are great. The ATI driver automagically began working again, after not working when reinstalling it after a run with the open-source driver. So I updated that to the latest, before I was only getting 50 – 100 FPS with glxgears, now I get about 500 to 600 FPS with glxgears on my Radeon 9600, talk about an improvement. Now only if October’s driver would come sooner so I can have Compiz fusion running with out XGL.

After fixing the graphics issues, I moved on to getting the shared printer on mtekktux to connect on my computer, that didn’t require much effort either. Just a quick configuration of CUPS, and updating HPLIP, setting the printer as default, and Kablam! printing works.

Now came the annoying sound issues. In particular, if alsasound is not started your previous gmixer settings get lost in Gnome (probably the same way with KDE). Fixing this is simple, just add alsasound to the default run level using rc-update add alsasound default. Now on boot alsasound will launch restoring settings from the previous session (that’s if it is configured to do so, which it is by default). As things have gone good so far, I plugged in my Logitech Music Anyware USB wireless audio device. Running cat /proc/asound/cards revealed:

ALSA found it! So it was time to test to see if it works, and sure enough it does. The remote doesn’t work (yet), but that’s because Audacious doesn’t hook into the multimedia hotkey functions yet. For something that does not claim Linux support, having the major function of it work is success by any standard.

It sounds like AMD will follow Intel’s lead in opening up their graphics processors for open source driver development. Today they released full specifications, no strings attached (in the form of NDAs that is). This comes after last week’s announcement that the new fglrx will offer a major improvement in performance for Linux users. As my computer has a obsolete Radeon 9600, I await the day when running Compiz Fusion is possible without the use of that ugly beast known as XGL. That date is set for October should I decide to stick with the fglrx driver. Hopefully by Christmas the open-source driver will be a truly viable option (I spent three days trying to get it to work with my 9600 with no luck).

On a side note, I received over a terabyte worth of hard drives plus other computer components. This time a good portion of the drives are 7200 RPM, and I now have a back-up motherboard (exact same model as my current). Ideally, I’ll add a 250GB hard drive to mtekktux to supplement it’s 80GB drive to turn it into a media and print server. Then I’ll replace my 160GB 5400 RPM hard drive with a 250 GB 7200RPM one for my XP drive, that should shorten the load times for maps in 2142.