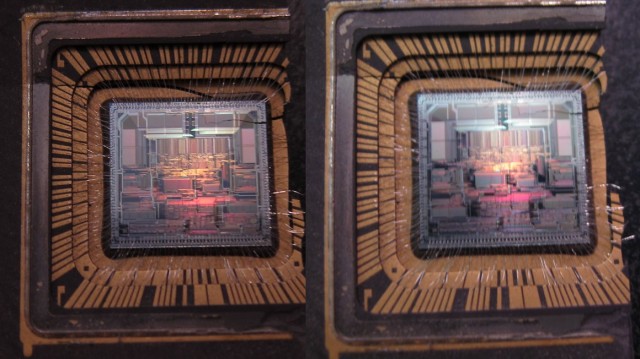 After several years of trusty service (the first few months were a battle, but that’s besides the point), I’m replacing my PowerShot SD850 IS with something a little more advanced. Since I’m not ready to take the plunge into the world of DSLR, and didn’t want something terribly large, the S90 fit the bill. Simply put, there are too many things to love about the S90. It’s small (though slightly larger than the SD850), has a fast lens, has a large (for a ‘point and shoot’) sensor, and has a control right around the lens.

To be honest, the SD850, with CHDK loaded, can do most of the things the S90 does out of the box. However, the larger sensor is immediately noticeable. The images produced by the S90, given the same conditions, are sharper with richer colors than the SD850. This is my opinion after taking several photos with both cameras and reviewing them on my color calibrated HP LP2475W monitor.

As seen in the above picture of a Pentium 90Mhz, the S90 has a slightly shorter depth of field (as expected thanks to the lens and larger sensor than the SD850). This was with everything but focus set to auto. Depth of field is, to some extent, controllable as the aperture can be locked when in aperture priority mode (Av on the dial).

Low light performance is excellent. Even the flash is fantastic compared to the SD850’s flash. For starters, using the flash does not completely wash out the picture as it does with the SD850. The camera will remember your flash settings in most modes (the SD850 only remembers them in manual mode). The popup flash can be annoying, especially when I forget it is there when I turn the flash on.

After playing around with it for about a month now, I would definitely buy it again. After seeing the current lineup of Canon point and shoots, there really is not anything else that I would have purchased. Hopefully, I’ll have that same opinion after taking it on a few trips this summer. Below is a selection of the photographs I’ve taken so far with my S90.